From student to staff member – switching teams at SMSJ 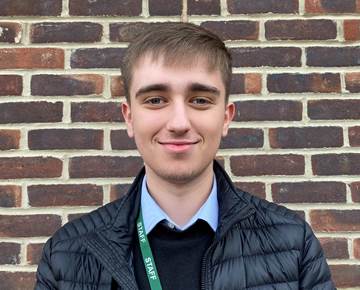 Alex enters the staffroom at St Mary’s and St John’s CE School, Barnet ,twiddling his staff id badge. When asked if everything’s ok, he replies with a smile, “I’m pretty much used to the place now; I know my way around” and laughs. You see, this year, Alex has made the transition from student to staff member.

One of the weirdest things about ‘switching teams’ – as he calls it – is calling his old teachers by their first names. The first member of staff he spoke to on first name terms? ‘Martin – Mr Serrão, SMSJ Principal, – he pretty much insisted on it as soon as I arrived but I do see all the teachers as people now.’

Alex was a student at SMSJ from Y7 right through to Y13 where he gained three A levels in psychology, economics and English literature and went on to gain a place at Exeter University, part of the Russell Group, studying ‘Digital Technology Solutions and Cyber Security’. A key aspect of his degree is that it involves a work-based placement which he is undertaking at SMSJ as an IT technician. It is a smart move: he will leave debt-free, with savings, and with four years’ work experience already under his belt. Having already served seven years as a student, it is perhaps the world’s longest interview!

Alex was actually the last of all the students to apply to university but the first to receive an offer. When asked why he thinks this might be: “I guess it was a pretty cool personal statement.” It was actually a fast response from all five of the universities he applied to, not just the one. His extra-curricular activities are pretty amazing. When he was just 15-years old, he set up an online group which advised people how to sell niche items such as limited edition trainers. His idea was to collect all the information in one place and to outsource work to specialist advisors. At one point, his company had over 800 paying members.

During lockdown, he also set up another business where he ‘leased out IP connectivity, hosted servers for people and sold virtual machines’ but which he has now sold because it had a shelf-life. Asked how he knew how to do this: “I’ve always liked to dissect other groups; to see how I could do things better. I saw the providers making money and…” And this it seems is the key to Alex’s success: his belief that there is always a better way to do things. “I wouldn’t call it success,” he says rather modestly, “but you have to find your interest and then look for opportunities. It’s hard work; it takes time. Most people can learn anything, but doing it is the issue”.

A key aspect of university life, though, is moving away from home. Is he missing out on aspects of student life? “I’ve visited friends that have moved away and stayed in their student digs, but most of my friends have stayed in London and most of them still live at home so we still hang out.” With a full-time degree course and a 9-5 job, it will come as no surprise that Alex doesn’t really relax. Unsurprisingly, he’s always busy. The main thing, he says, that helped him most was giving up PlayStation because it gave him lots more time to focus on new opportunities or, he laughs, “maybe it was just because I wasn’t the best!’” And perhaps this is what explains his extraordinary achievements so far: his belief that he can be the best if he works hard.

Adapted from an interview by Ms Muller at SMSJ – first appeared in Spotlight on Secondary Christmas 2021 edition.