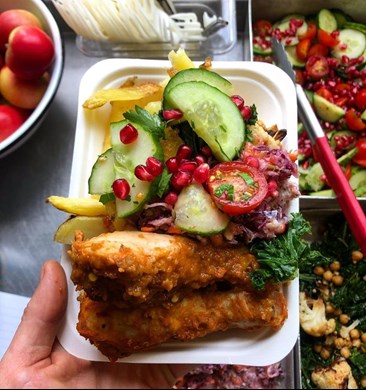 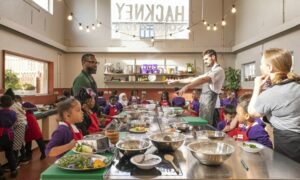 A QUIET revolution is gently bubbling away in school kitchens and classrooms. Students feel the effects from desk to dining table — and some Church of England schools are part of this nutritional “new wave”.

Many people still remember school dinners of the 1960s and ’70s — for some, like a Hammer horror encounter — leaving them with a fear of cabbage. The ’80s and ’90s turned school canteens into fast-food outlets offering pizza, fries, and fizzy drinks. A 1999 medical survey suggested that children in the ’50s had more nutrious diets — even during rationing.

Since then, we have had Jamie Oliver, the School Food Plan, and Marcus Rashford intervening on behalf of school nutrition. This month, the Government has named and claimed its own “school cooking revolution”, in its recent White Paper Levelling Up the United Kingdom.

To deal with two of the biggest contributors to ill health, poor diet, and obesity, Westminster is taking up some of the recommendations from Henry Dimbleby’s independent review of the food chain in the UK, the National Food Strategy, published last July, which included five recommendations for changing school food.

Policy announcements that the Government has made include: schools to share food “statements” on their websites; brand new content for the curriculum; a pilot of new training for governors and academy trusts on a “whole-school approach to food”; an aim for every child leaving secondary school “to know at least six basic recipes that will support healthy living into adulthood”: and a joint project between the DfE and Food Standards Agency to “test a new approach for local authorities in assuring and supporting compliance with school food standards”.

ALREADY leading a humble part of school food subversion is Hans Louis. Coming from the beaches and lagoons of Mauritius — a place that offers its own multi-cultural culinary experiences — he learned his craft in the kitchens of top London hotels. Now he is executive chef at eight C of E schools for the London Diocesan Board for Schools (Holy Trinity, St Ann’s, St Paul’s and All Hallows, and St Michael’s, in Haringey; Millbrook Park, in Barnet; St Andrew and St Francis, in Brent; St Richard’s, and Stanwell Fields, in Hounslow).

He oversees the catering teams, and produces the menus, costings, and food curriculum. “It’s quite busy,” he said, “but quite rewarding.” He believes that the Church of England schools in his care have adopted the right approach in delivering distinctive dishes to the children.

“We run the school kitchens like hotel kitchens: with a brigade of head chefs and kitchen porters,” Mr Louis said, speaking with the professional air of a former hotel chef. “We make fresh food and fresh bread every single day, using fresh ingredients.”

Mr Louis and his teams tune everything to restaurant pitch. They use the same food sources as the hotels — even down to a fishmonger in Devon. “We get our fish weekly from them for our Friday fish; so we can do fish and chips or baked fish,” he said. “To be using the same product as a five-star hotel, and giving that to our children, is good for them.”

Mr Louis finds himself amid life-changing experiences in schools, as children taste such food as fresh tomatoes that they have even helped to grow in the kitchen garden. “It’s amazing to see,” he said.

CHURCH of England schoolchildren in Hackney have also joined this growing movement. Pupils from St John and St James C of E Primary School have visited Hackney School of Food: a food education hub set up by LEAP Federation of Schools with the national charity Chefs in Schools.

The School of Food head food educator, Thomas Walker, is fervent about his work. His commentary brims over with enthusiasm. A former head teaching chef at the Jamie Oliver Cookery School, he guides children on food’s journey “from soil to spoon”.

He runs the School of Food from a redundant caretaker’s cottage that has been stripped out and converted into a vast “cathedral” of cooking. From floor to exposed rafters, the building has everything from professional-grade ovens and induction hobs to height-adjustable worktops — and even a simple rainwater, harvesting system.

Surrounding the centre are beautiful gardens, orchards, growing beds, a wild-flower meadow, four chickens in a coop, and nearly 8000 bees in a hive. The complex is on the edge of two housing estates. For visitors, it’s a revelation; for him, “It’s my farm,” he says.

His temple of taste helps schools to engage with food rather than treat it as a “tick-box” on the curriculum. He welcomes groups of up to 30 students at a time — mostly from primary schools — but he is also starting to host secondary schools.

Like Mr Louis, Mr Walker has the privilege of watching children experience transformative moments daily. “We have a lesson where we bake brownies,” he explained. “But we explain they’re a treat, and we reduce the amount of sugar and replace it with beetroot.”

Of course, one child said that they hated beetroot. But, eventually, they took a bite, had a little taste, and said, “That’s not too bad.” That child ended up eating a beetroot like an apple. It was just another breakthrough — the kind they see all the time in Hackney.

Mr Walker’s young guests experience more than cookery. They are developing their reading skills as they get absorbed in recipes, using mathematics as they calculate the correct weights of ingredients, and learning the art of following instructions.

Although it is just one site, it is hoped that the School of Food could be replicated around the country. They are putting together a “toolkit” to help others learn from their journey.

You can read the complete article here