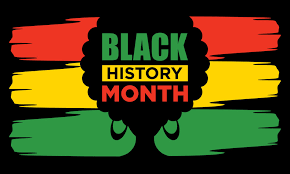 Some of the posters from St Jerome Bilingual School’s poster competition. 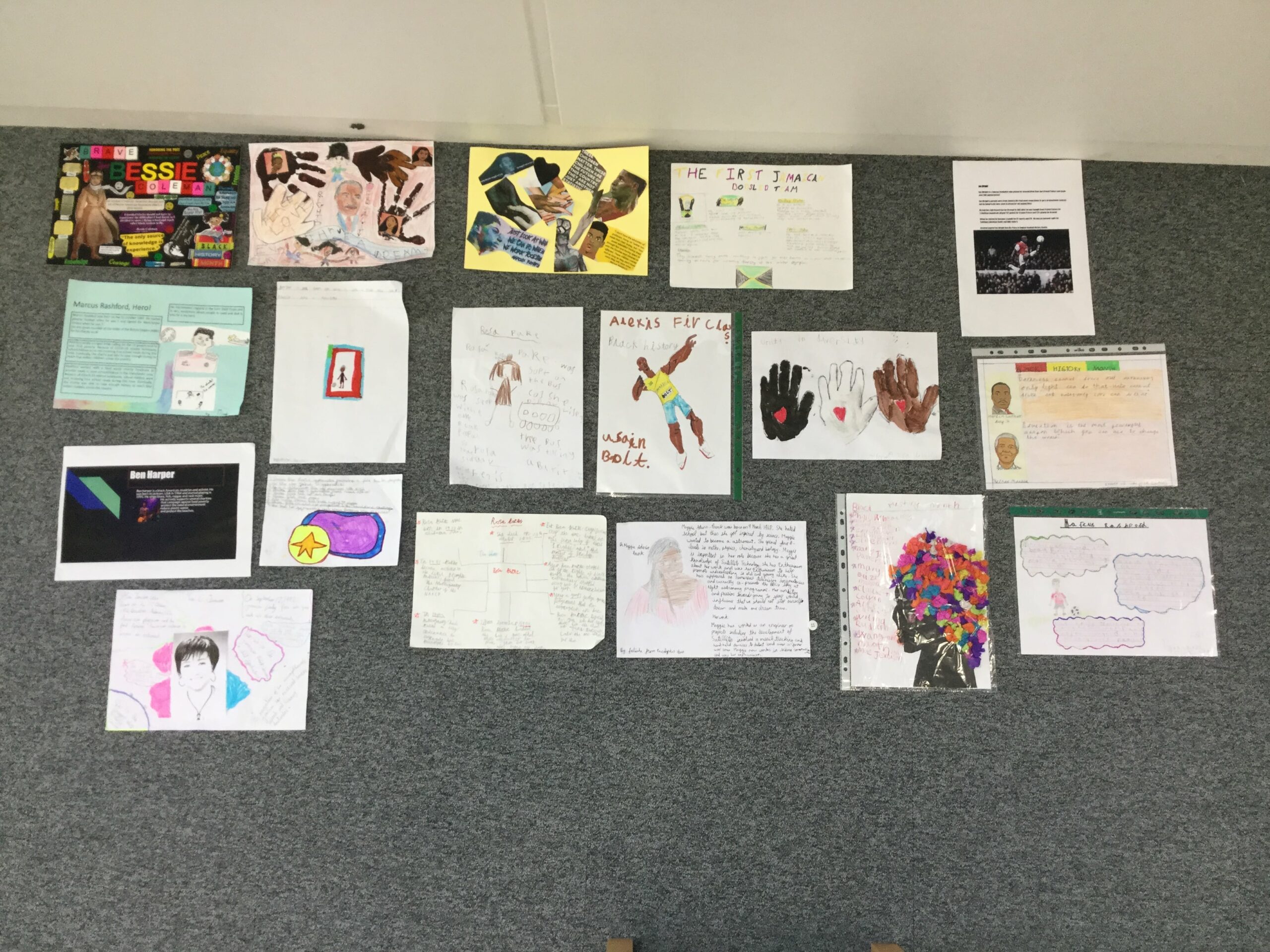 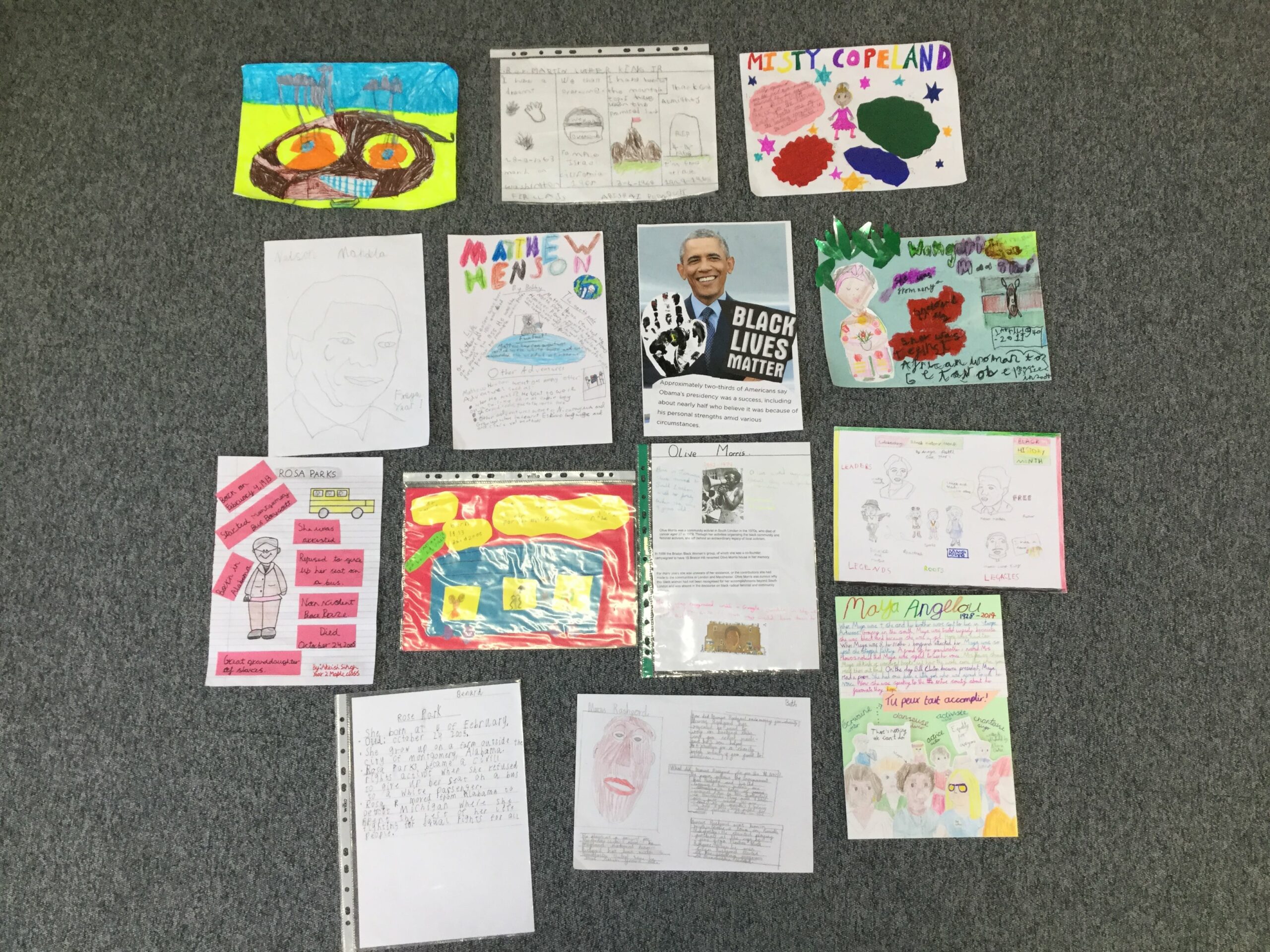 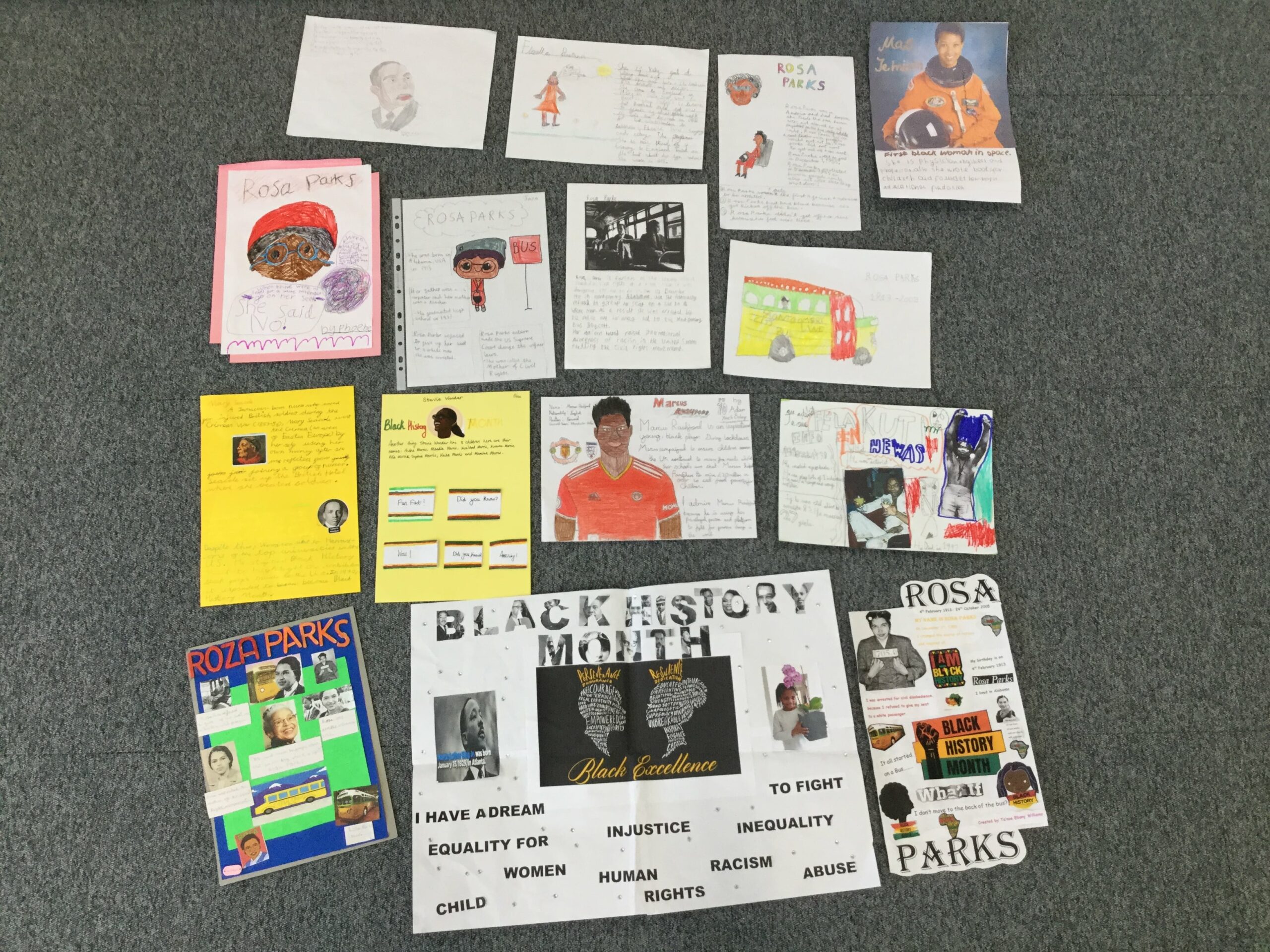 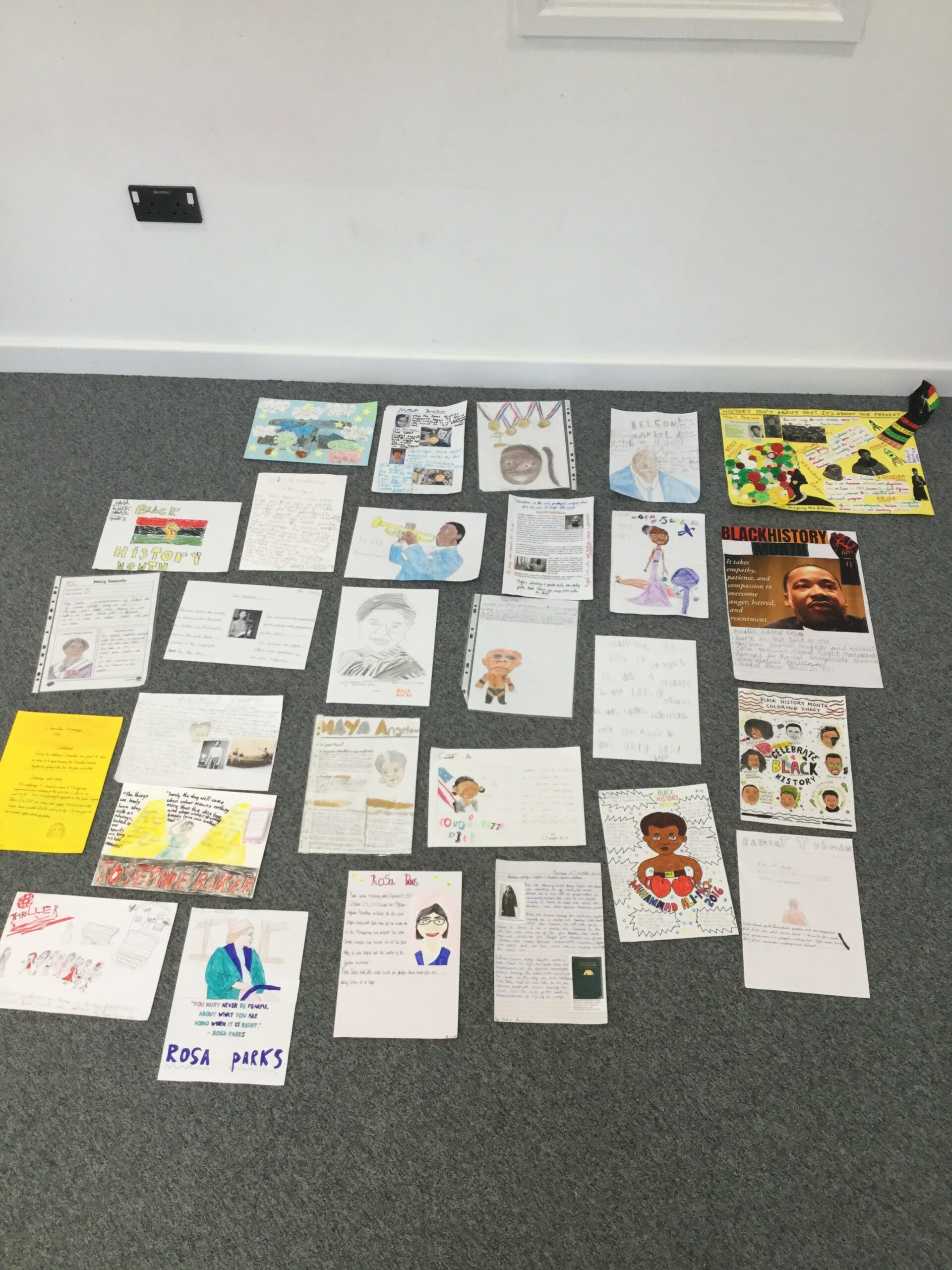 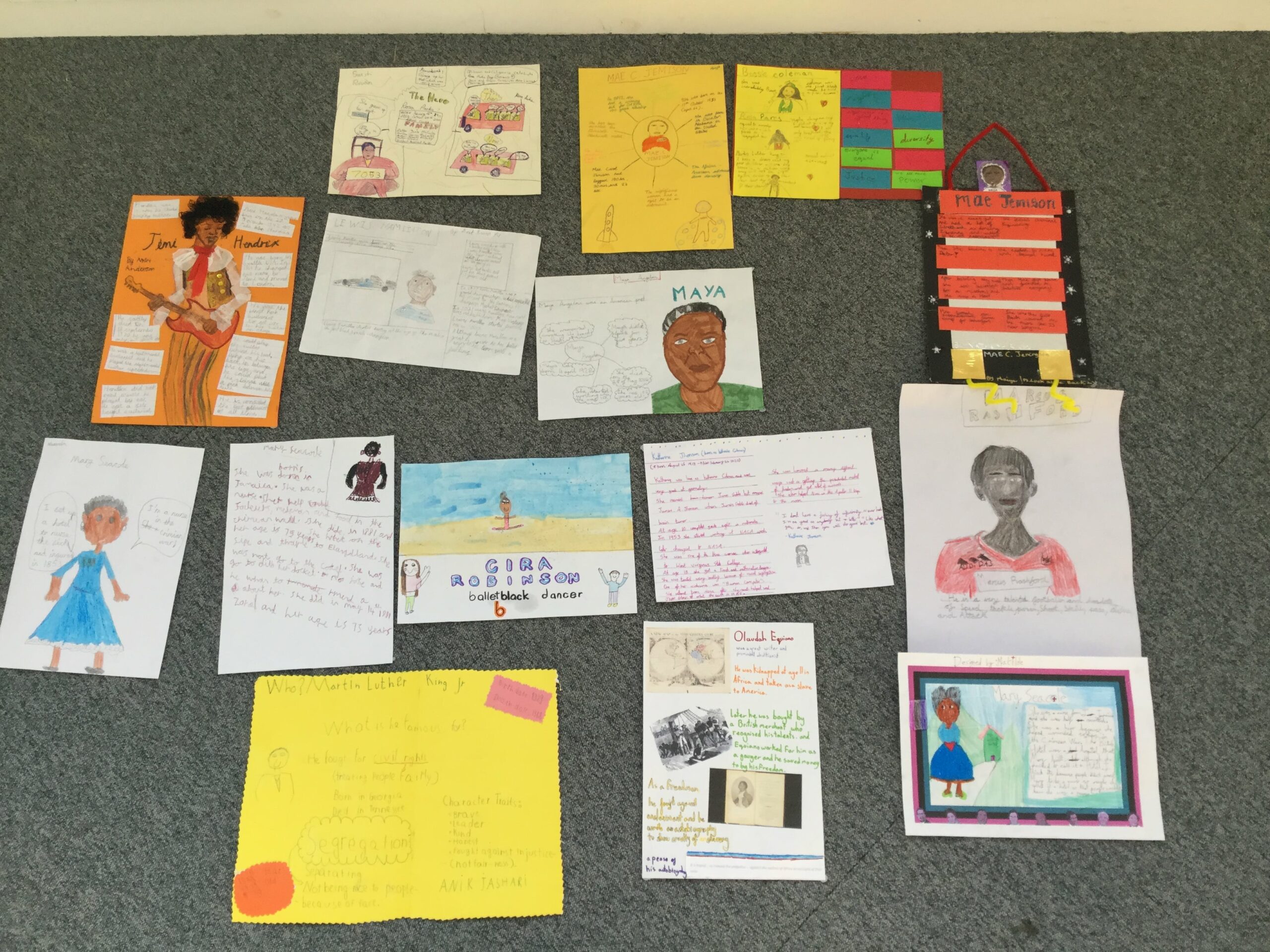 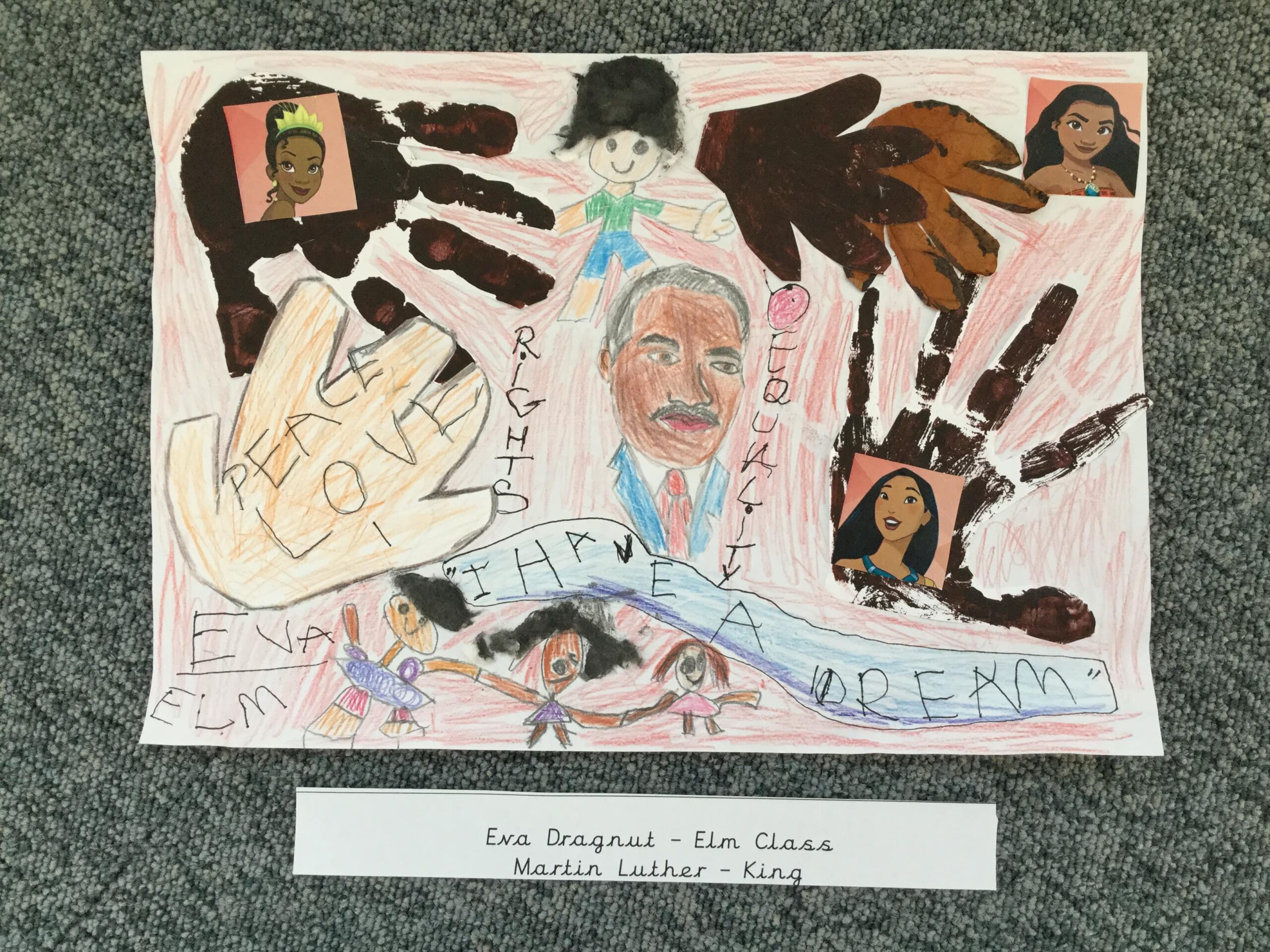 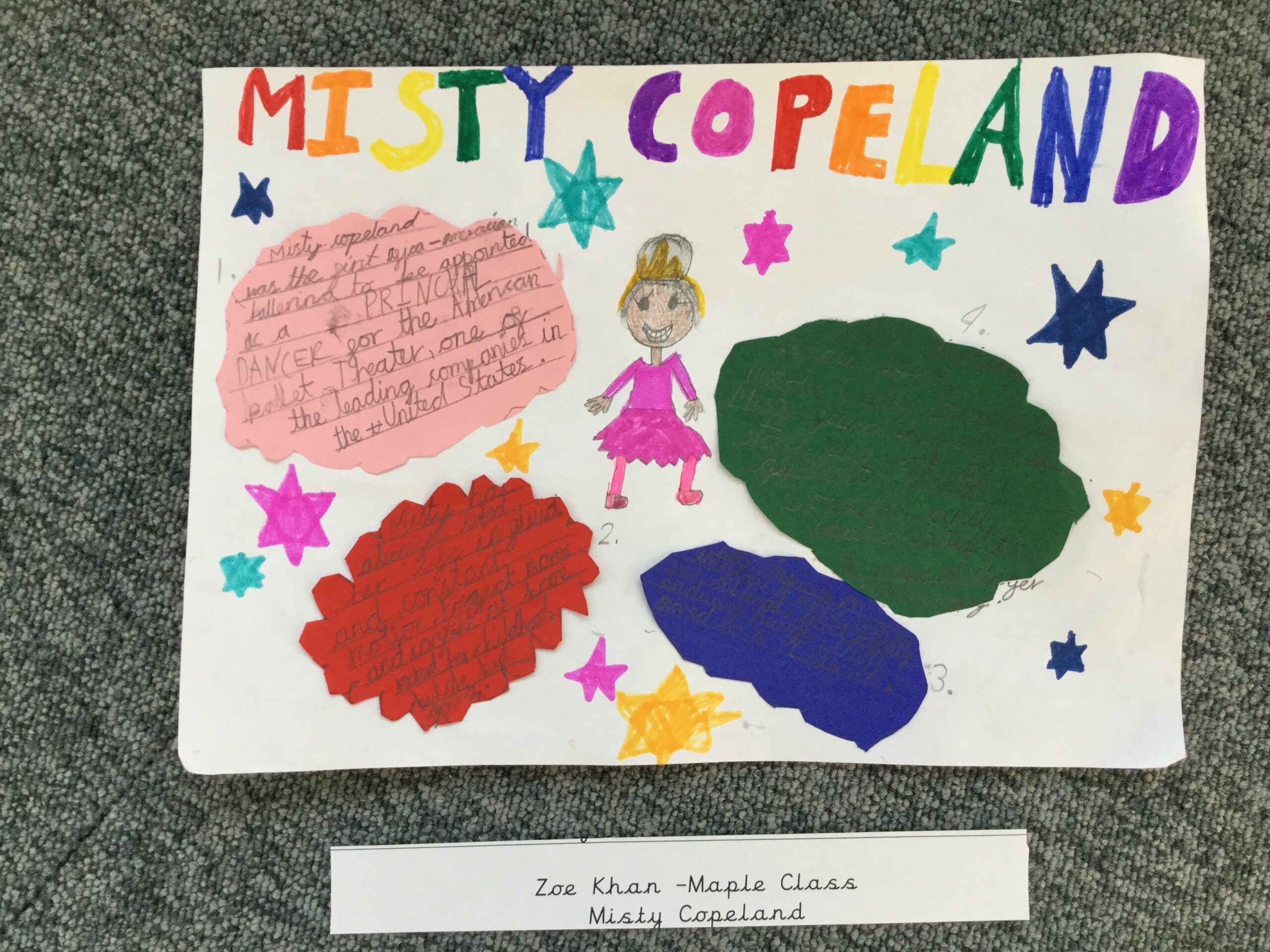 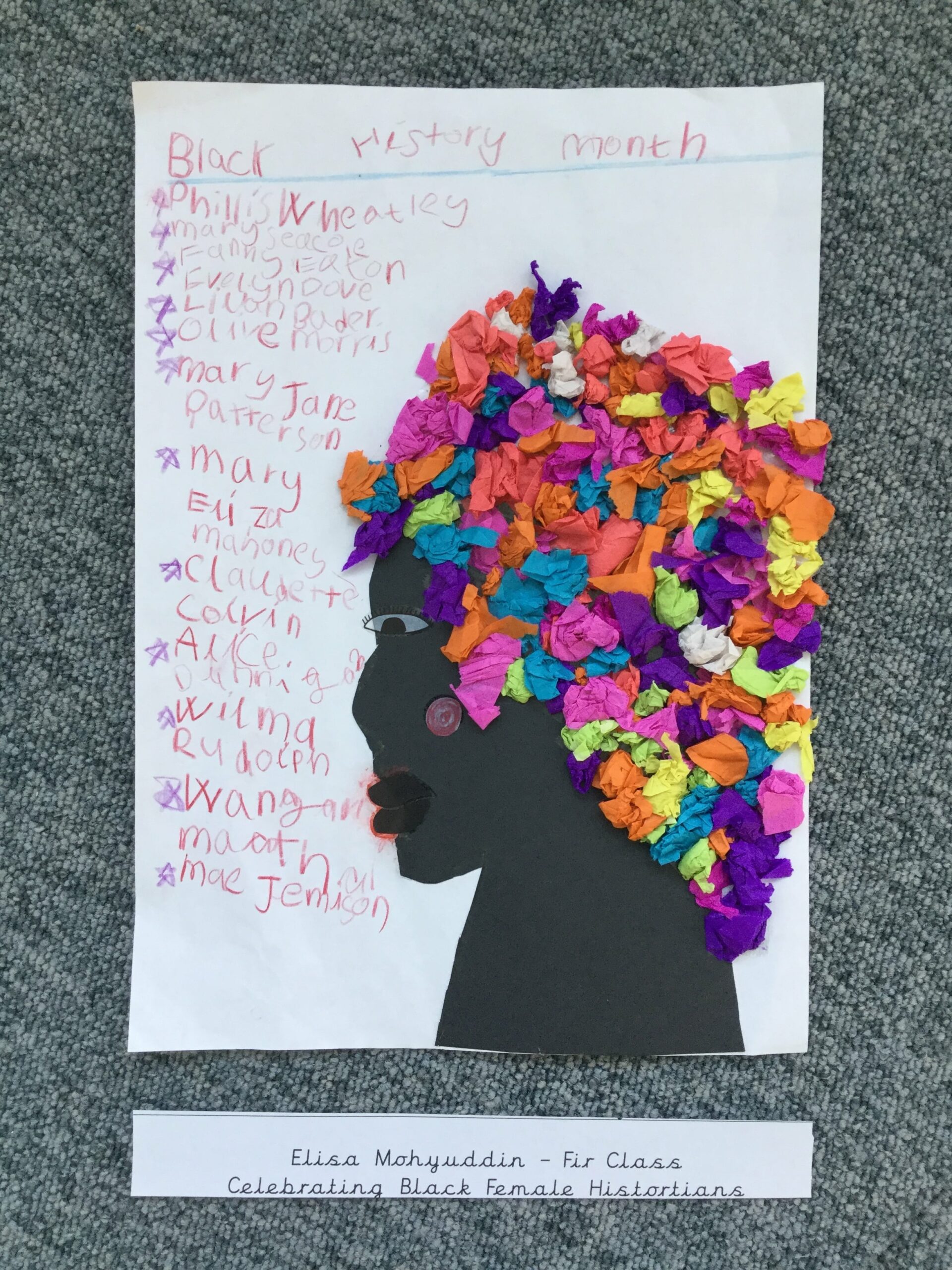 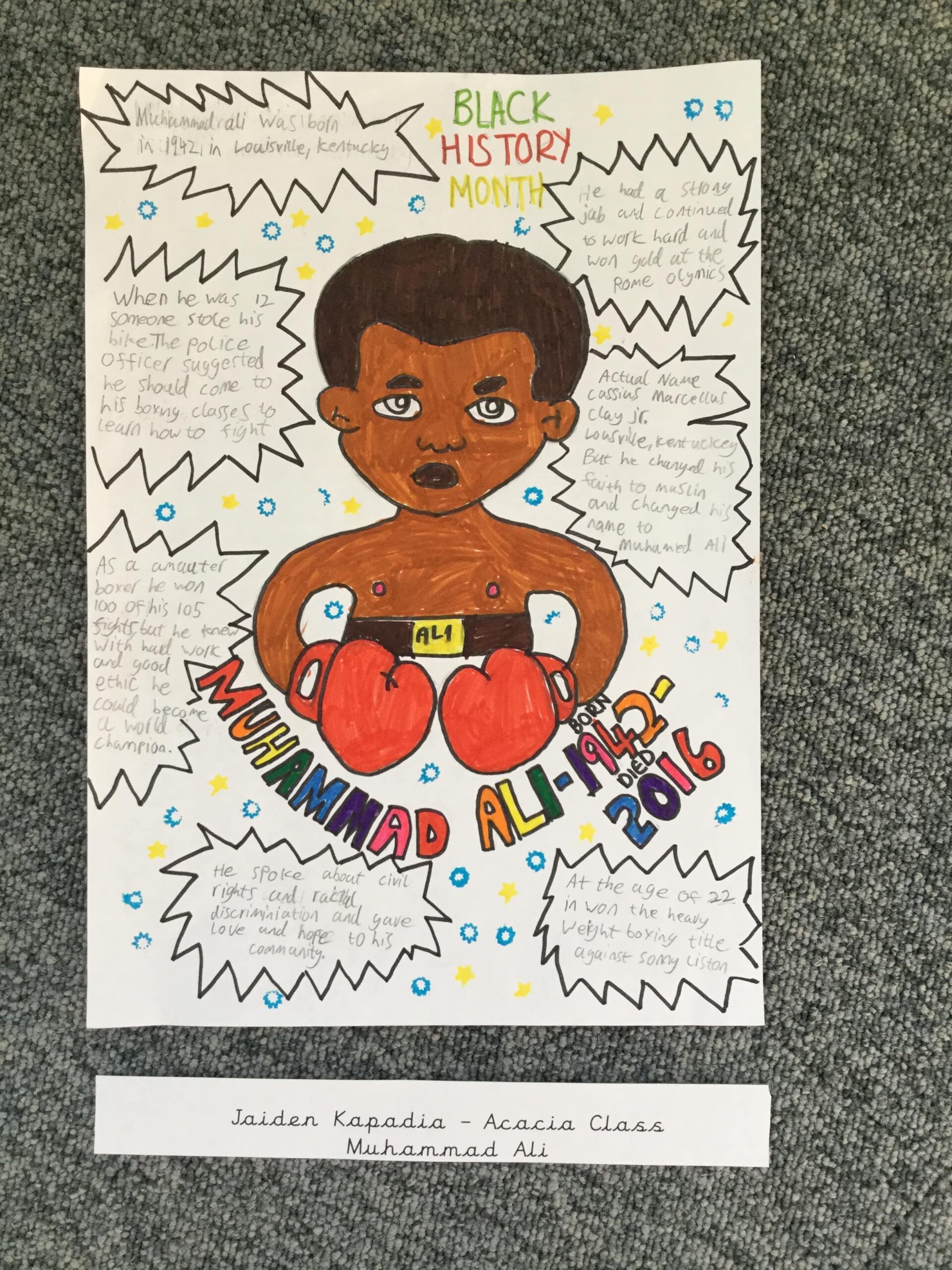 Occasionally the LDBS report on what we call a ‘long read’. We went to meet two teachers and talk to them about Black History Month. What their school is doing at what it means to them personally.

LDBS spoke to Miss Tomlin, Year 1 Teacher and Mr Spiller, Year 4 Teacher about how the school is celebrating Black History Month and what this month means to them. “We are doing lots of exciting things.” they said

“The school are running a poster competition with one winner per class. We are also showing racism the red card by, as a school, wearing red on Friday 22nd October. The pupils pay £1 and the money raised goes to Show Racism The Red Card an anti-racism education charity. Classes will also be presenting at a virtual celebration assembly for Black History Month to fellow students on the theme of famous BHM individuals who classes have been researching including Beyonce, Ade Adepitan, Bessie Coleman, Usain Bolt and, of course, Marcus Rashford. We are also very lucky to have our own catering team who have stepped up to the challenge and created a special menu for us including Jamaican jerk chicken and ginger cake. As a school, we have launched a diversity steering group, in conjunction with the parents with the aim to create a more diverse curriculum.

LDBS – What does it mean to you to co-ordinate Black History Month in this school?

Miss Tomlin – Do you mean have they asked the black woman to do BHM as a token? That’s not the case here, I was really glad to be asked.

MT – I was the only black child in my primary school, and I think we were the only black family who lived in my particular area of Hertfordshire. When I went to secondary school, also in Hertfordshire, there were a number of black children but still not many. I remember the teaching of a lesson on slavery and some of the children looking at us, maybe feeling uncomfortable. I certainly felt uncomfortable.

MT – When I went to university I went to the one that I knew would be the most ethnically diverse. I really researched it. I went to Leicester. I studied Psychology with Education and I think it was the lack of BAME people in education that really gave me a passion for me being a teacher. It is very important that ethnic minorities children see a representation of themselves in their educators.

MT – My parents came over to the UK with the Windrush generation and my brother was born in Jamaica, so I do consider myself Jamaican as that is the culture I grew up in and still do associate with even though I was brought up in Hertfordshire.

LDBS – Which team do you cheer when Great Britain and Jamaica are in the same event at the Olympics? We spend some time thinking which event this would be and decide on athletics

MT – I would always cheer Jamaica, although I was born in England I still identify as being Jamaican.

Mr Spiller – I think people, especially children are really interested in race and being racially aware; not in the way of being racist, but in the way of you look different to me let’s talk about that.
When I’ve taught children about segregation, for instance, they are very much ‘that’s not fair.’ Being fair is very important to children at this school. We have a poster here on Justice, which is one of our school values and the children wanted Black Lives Matter to be included on it.

MS – I know on those diversity questionnaires, those bits at the back of application forms I am mixed race; that’s the box I tick, but because I don’t ‘look’ mixed race it gives a different insight. My mother, herself, mixed race, was born in Calcutta, Kolkata since 2001, at a time when there were huge changes going on in the area and to be mixed race was looked down on.

MS – I don’t think unless people, teachers and other pupils when I was at school, knew my family or my parents went to Parents’ Evening that people didn’t think I was mixed race. I can remember being called the P word as a child as a racist putdown but it wasn’t true. I have no connection to Pakistan. So it was annoying partly because it wasn’t correct.
I’ve never felt the need to ‘come out’ as it were I want the children to know me as Mr Spiller.

MS –There is an American phrase called ‘one-drop’ where if any of your parents or grandparents etc were non-white then you are black and I think we have American culture touching British culture and that goes back to race being interesting. Especially when more and more people are doing DNA ancestry tests and finding out they are not exactly what they thought they were.

MT – Obviously people know I’m black when they see me but my surname is not ‘international sounding’ and when I get married I will have an even more ‘British’ surname, so that can bring some unexpected double-takes when I walk into a room.

MT – As an educator, I am keen to change the way ethnic minorities are portrayed within literature and children’s learning. I’m not a huge fan of a book like Handa’s Surprise by Eileen Browne because it gives the impression that people in Africa live in mud huts when many African people live in cities very like London. Often the first knowledge that children encounter about Africa is negative and does not reflect their rich culture. I am glad to see more ethnically diverse books in school and books where a character might be from a BAME background but that isn’t the whole focus of the story.

MS – I’m really glad to see that we, as a school, aren’t doing BHM in isolation. We are asking parents to join our Diversity Steering Group and looking at diversity in all the subjects we teach.

MT – Many things were invented by people of a BAME background which should be celebrated and learnt by all children.

LDBS – Is BAME the right term to use?

MT – For me I am black, I have a Jamaican heritage and I was born in this country.

MT – I don’t think I would appreciate that that meant me. I think BAME is difficult for some people as it is too vague. Part of James’s family comes from Kolkata and mine from Jamaica, that’s what more than 15,000 kilometres apart. That’s a pretty big distance. So to put all ethnic minorities under the same umbrella seems unfair as it does not reflect the diversities within the minorities

MS – I think sometimes as a society we rush to label people. This child is this so that means this and they will act like this in a certain situation and that’s not true, but we also do it as adults too.

MT – We work in a bilingual school, staff and children are used to switching languages. We do ‘code-switching’ all the time. Most people do some switching it’s like speaking ‘posher’ at a job interview than you might with your friends when you are out for a meal. We all change whether we realise we are doing it or not.

MS – I don’t like other people putting me in a box, so to speak; like with an application form. I think most labels are not necessary.

LDBS – What would you say to the Year 3 child version of you?

MS– Don’t stress so much about what people think you are. Learn about yourself and where you come from. You are many things.

MT – Be proud of your identity, never feel you have to change to fit the room.

We were delighted to be able to speak to two of the teacher from one of the schools we support.
If you would like your school featured in our news pages, whether Black History Month related or if you have a story about something else please email stuart.webster@london.anglican.org
You can discover more about St Jerome Church of England Bilingual School here